History of The Breathing Association

The Breathing Association was founded in 1906 as the Tuberculosis Society. Under the supervision of visionary Carrie Nelson Black, the society provided nutrition, medical care and sanatorium services to people who could not afford proper medical care.

Tuberculosis, known as consumption or the White Plague, killed one out of nine people in our community in the early 1900s. In the early years, a tuberculosis dispensary was operated at 40 S. 3rd Street in Columbus for people needing consultation and treatment.

The first clinic was held on the 2nd floor of a dingy, dark building at 64 South Forth Street. A stethoscope was the only diagnostic aid available to the examining physician. The Dispensary was later moved to 39 East Rich Street and finally to 503 Oak Street, where in 1920 x-rays became available.

In 1908, the Dispensary continued free examination services, the education committee educated the public, the nursing staff made visits, delivered supplies, comforted patients and kept the hospital and camp full of patients. Sputum cups, medicine, milk and eggs were distributed free of charge. 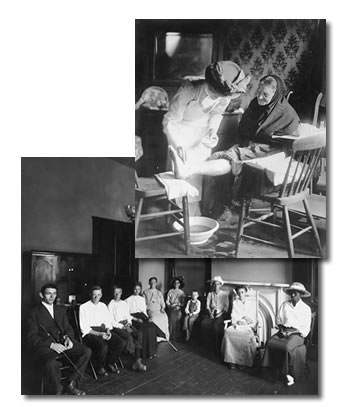 One of the first attempts to provide a place for the isolation and treatment of the tuberculosis patients in Franklin County was the establishment of the TB camp in the Glenn Echo district at the north end of Summit Street. Most of the patients were in extreme poverty, with insufficient and improper food. In 1913, the camp moved to Minerva Park, north of the city on Cleveland Avenue. Finally in 1914, the Franklin County TB Sanatorium was opened and solved the difficult problem of isolation of active infective cases that were spreading the disease from one family member to another.

A Fresh Air School was opened in 1913 at Hudson Street and Neil Avenue for children in homes where there were one or more cases of tuberculosis. In 1931, the Nightingale Cottage was opened on Brice Road as a tuberculosis preventorium for children. Preventoriums operated 24 hours a day, 12 months a year for the care of children with “sub-standard health.”

In 1937, TB tests in the schools began in Westerville and expanded to all schools in Franklin County. In 1938, a mobile TB Clinic began a mass TB screening program.

Public education is a thread that ran throughout our history. Samuel P. Bush, founder of Buckeye Steel Castings and grandfather and great grandfather of two U.S. presidents, chaired the Factories and Workshops Committee. His goal was to educate corporate Columbus to improve sanitary conditions within their companies to prevent the spread of TB. Mass screenings continued throughout Columbus in the 1950s with the agencies’ portable chest x-ray services.

In the 1960s, the Association changed its name to Franklin County Tuberculosis and Respiratory Disease Association. Its programs expanded to focus on the diseases resulting from tobacco use.

As TB became controllable and emphysema, other chronic lung diseases, lung cancer and asthma increased, the agency became the Central Ohio Lung Association in 1972 and focused on those diseases.

Administratively, in the early years, the agency was affiliated with the Christmas Seal Campaign.

In 1985, the agency ceased affiliation with Christmas Seals and rejoined United Way of Central Ohio as a member agency, which it continues today.

Today, The Breathing Association is a local independent lung health agency. There is no affiliation with American Lung Association, and 100% of the contributions stay in central Ohio to assist our neighbors in need of help.

Today, consistent with the roots of the Tuberculosis Society, The Breathing Association continues the rich tradition of direct patient services to the underserved and underinsured.